Niebuhr's Museum. Artefacts and Souvenirs from the Royal Danish Expedition to Arabia 1761-1767 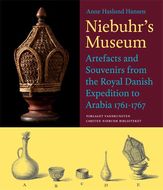 Niebuhr’s Museum. Artefacts and Souvenirs from the Royal Danish Expedition to Arabia 1761–1767 is the first comprehensive presentation of the largely unknown collection of antiquities and ethnographic objects acquired during this important 18th century scientific expedition to the Middle East.

The expedition, a brainchild of the Göttingen professor Johann David Michaelis, aimed at shedding light on the historical and cultural background to the Old Testament. Its scholarly and scientific results were multifaceted and are best known from the publications of the cartographer Carsten Niebuhr (1733–1815), the only survivor of the expedition, which included among others, the Swedish naturalist and pupil of Linnaeus, Peter Forsskål.

The Niebuhr collection, primarily held in the National Museum of Denmark, offers an invaluable resource for the study of 18th century travellers and expeditions to the Middle East.

In its investigation of the history and context of each of these intriguing objects, Niebuhr’s Museum presents a new narrative of the ill-fated voyage. Analysis of this collection also illuminates the collecting practices of the period, providing insights into the genesis of the core holdings of many of today’s museums.

Dr. Anne Haslund Hansen has previously published the journal of the expedition’s philologist, Frederik Christian von Haven, Min Sundheds Forliis, 2005 (with Stig T. Rasmussen). She works as a curator at the National Museum of Denmark.

Link to the Danish edition of this book.